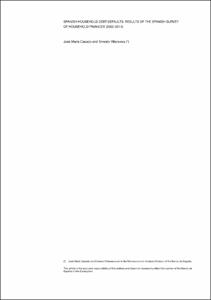 View
Spanish_household_debt.pdf
1,65 MB
Authors
Casado García, José María
Villanueva López, Ernesto
Issue Date
Physical description
23 p.
Abstract
According to the EFF (the Spanish Survey of Household Finances), the proportion of indebted households that had incurred a debt default over the past 12 months increased from 13.7% in 2002 to 21.1% in 2014. This article has two objectives. First, to characterise the population groups among whom debt defaults have most increased, drawing on EFF data from 2002 to 2014. And second, using panel and cross-section components of the EFF, to estimate how defaults respond to declines in the income and changes in the labour market status of household members throughout the economic cycle. The results suggest that the high incidence of declines in household income and changes in the labour market status of the main household earner are important factors when seeking to understand the increase in debt defaults over the 2002-2014 period. Throughout the economic cycle, onefifth of indebted households underwent reductions in their income that led them to fall, at least, to a lower quartile of the income distribution. During the recession, the probability of incurring debt defaults following declines in income on this scale increased substantially. Further, among the 10% of indebted households, the main earner experienced job loss during the three years between the survey span. Such job loss was associated with a high probability of incurring defaults during the recession. These results confirm that the course of household defaults during the recession was closely linked to changes in their disposable income.
Notes
Artículo de revista
Publish on
Financial Stability Review. Issue 35 (November 2018), p. 149-171
Other versions
Versión en español
Subjects
Estudios empíricos sobre el consumo; Crédito y mercado hipotecario; Crédito al consumo; España
Appears in Collections:
Financial Stability Review. Issue 35 (Autumn 2018)