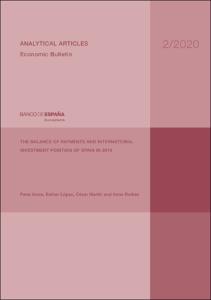 View
be2002-art18e.pdf
608,84 kB
Authors
Alves Álvarez, Pana Alejandro
López Espinosa, Esther
Martín Machuca, César
Roibás Millán, Irene
Issue Date
Physical description
18 p.
Abstract
According to the balance of payments statistics, Spain’s net lending stood at 2.3% as a percentage of GDP in 2019, slightly down on the prior year, against a backdrop of continued, albeit slowing, economic growth. Developments in net lending are explained by the reduction in the capital account surplus, resulting from the decrease in funds from the EU, stagnation in tourism receipts as a percentage of GDP and the widening of the deficit on non-energy goods, which offset the improvement in the energy balance prompted by the decline in oil prices. There has been an abrupt change in the outlook for the economy’s external balance as a result of the COVID-19 health crisis, with major uncertainty in the near future about the scale (and even sign) of its effects on this balance, against a backdrop of a drastic reduction in the foreign goods and services trade. For the time being, the information on the balance of payments relating to March shows a net borrowing position, for the first time in that month since 2012, associated with the sharp fall in tourism receipts caused by the measures to restrict movement adopted in Spain and in source countries. Future developments in inbound tourism, in particular, will depend greatly on how quickly restrictions on movement are lifted. This, in turn, hinges both on how the pandemic continues to unfold and on risk perception, which could lead potential tourists to voluntarily adopt social distancing measures. In 2019, the negative net international investment position of the Spanish economy decreased for the fifth year running, to stand at 74% of GDP, its lowest level since 2006. These developments, which represented the biggest fall in the last seven years, were underpinned by the nation’s net lending position, the positive amount of valuation effects and GDP growth. In terms of financial flows, excluding the Banco de España, the surplus balance of financial transactions of the Spanish economy was lower than in 2018, influenced by the rise in purchases of general government debt by international investors, which was only partially offset by the fall in foreign direct investment inflows. For the first time since 2014, the financial account of the Banco de España showed a surplus, affected by certain changes in the implementation of the ECB’s monetary policy.
Notes
Artículo de revista
Publish on
Economic bulletin / Banco de España. Analytical articles
Economic bulletin / Banco de España [Artículos], n. 2, 2020
Other versions
Versión en español
Subjects
Net lending; Current account; Financial transactions; Foreign direct investment; TARGET balances; International investment position; External debt; Financial analysis; Economic situation; Balanza de pagos; Inversión extranjera; Comercio internacional; Finanzas internacionales; Deuda exterior y préstamos internacionales; España
Appears in Collections:
Analytical Articles and Economic Notes
Economic Bulletin 2/2020