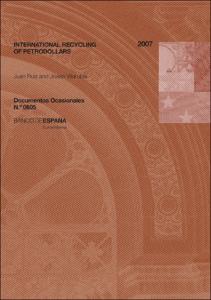 View
do0605e.pdf
586,71 kB
Authors
Ruiz Pérez, Juan Manuel
Vilarrubia Tapia, Josep M.
Issue Date
Physical description
25 p.
Abstract
The continued rise in oil prices since 2002 has resulted in a significant increase in export revenue for oil exporting countries. This increase in the price of oil and other commodities means that OPEC countries and Russia have received, between 2003 and 2006, a windfall of 1.3 trillon dollars with respect to their export level in 2002. This paper analyzes, using the limited data avalaible, the recycling of these resources back to the world economy through the trade channel, via higher imports, or the financial channel, via an increase in the net external asset position of these countries. Our results show that around 50 % of the windfall revenue has been used to increase imports, while the rest has been directed towards international reserva accumulation and other improvements in the net asset position of these countries. Comparing the current oil price increase with previous ones, such as those resulting from the tightening of oil supply in the 70's, we find that the trade channel has been more important in the current episode than in previous ones. This can be attributed to (i)the perception of a more permanent increase in the price of oil in the context of rising demand, and (ii)the gradualism of the current oil price increase, wich has allowed a stronger response from imports. [resumen de autor]
Publish on
Documentos ocasionales / Banco de España, 0605
Other versions
Versión en español
Subjects
Oil; Exports; Imports; International reserves; Net international assets; Commercial recycling; Financial recycling; Petróleo y gas (extracción y refino); Comercio internacional; Rusia
Appears in Collections:
Documentos Ocasionales 2006