The role of the IMF in recent sovereign debt restructurings : implication for the policy of lending into arrears 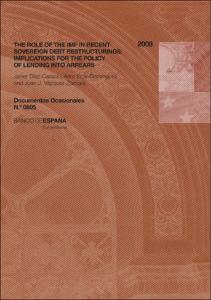 View
do0805e.pdf
970,29 kB
Authors
Díaz Cassou, Javier
Erce Domínguez, Aitor
Vázquez Zamora, Juan José
Issue Date
Physical description
39 p.
Abstract
This paper analyzes the role played by the IMF in eight recent sovereign debt restructurings from a comparative perspective: Argentina (2001-2005), the Dominican Republic (2004-2005), Ecuador (1999-2000), Pakistan (1998-2001), the Russian Federation (1998-2001), Serbia (2000-2004), Ukraine (1998-2000) and Uruguay (2004). Our objective is to identify the various dimensions of the IMF's potential involvement during those processes, and to extract some relevant policy implications to reform the Policy of Lending Into Arrears. We find that the IMF can potentially exert a substantial influence on sovereign debt restructurings by influencing countries' decision to restructure when the debt burden is deemed unsustainable, by providing official finance to substitute for a loss of access to international financial markets, by setting a medium-term domestic adjustment path through conditionality, by providing 'independent' information at a time of heightened uncertainty, and by providing incentives both to creditors and debtors. However, a lack of consistency has tended to characterize the role of the IMF in recent sovereign debt restructurings. In part, this reflects the flexibility with which the IMF has adapted its intervention to country-specific factors. However, we argue that this lack of consistency has tended to exacerbate the uncertainty and information asymmetries that are often associated with sovereign debt restructurings, and that a more systematic approach is needed
Publish on
Documentos ocasionales / Banco de España, 0805
Subjects
IMF; Sovereign debt; Reestructurings; Default; Solvency; Deuda pública; Fondo Monetario Internacional; Argentina; República Dominicana; Ecuador; Pakistán; Serbia; Ucrania; Uruguay
Appears in Collections:
Documentos Ocasionales 2008