Emigration and human capital : who leaves, who comes back and what difference does it make? 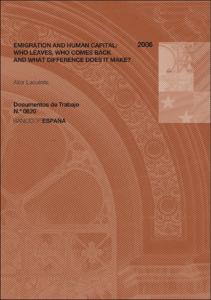