The determinants of household credit in Spain 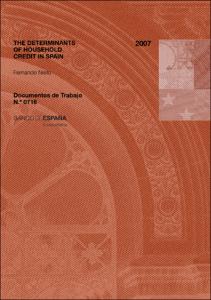 View
dt0716e.pdf
575,5 kB
Authors
Nieto Blázquez, Fernando
Issue Date
Physical description
29 p. : gráf.
Abstract
This paper estimates a single-equation model to analyse the main explanatory factors behind changes in Spanish household credit, considering that the behaviour of its determinants is exogenous. According to the evidence reported, household borrowing is determined in the long run by real spending, gross wealth and the repayment term for outstanding credits, which have a positive influence, and by the cost of loans and the unemployment rate, the effect of which is of a negative sign. Developments in the short run are influenced by changes in long term interest rates and in employment. The evidence offered suggests that, in general terms, the financing received by households over the period analysed is in line with what may be inferred from its determinants

however, the high volume of debt incurred entails greater exposure of the sector to unexpected changes in its income, in its wealth or in the cost of borrowing, especially in a setting in which floating rate loans are increasingly significant
Publish on
Documentos de trabajo / Banco de España, 0716
Subjects
Credit; Household; Error correction; Crédito y mercado hipotecario; Vivienda; España
Appears in Collections:
Documentos de Trabajo 2007