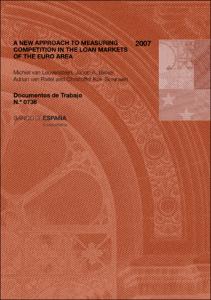 View
dt0736e.pdf
718,39 kB
Authors
Leuvensteijn, Michiel van
Rixtel, Adrian van
Issue Date
Physical description
32 p. : fórmulas, gráf., tab.
Abstract
This paper is the first that applies a new measure of competition, the Boone indicator, to the banking industry. This approach is able to measure competition of bank market segments, such as the loan market, whereas many well-known measures of competition can consider the entire banking market only. A caveat of the Boone-indicator may be that it assumes that banks generally pass on at least part of their efficiency gains to their clients. Like most other model-based measures, this approach ignores differences in bank product quality and design, as well as the attractiveness of innovations. We measure competition on the lending markets in the five major euro countries as well as, for comparison, the UK, the US and Japan. Bearing the mentioned caveats in mind, our findings indicate that over the period 1994-2004 the US had the most competitive loan market, whereas overall loan markets in Germany and Spain were among the best competitive in the EU. The Netherlands occupied a more intermediate position, whereas in Italy competition declined significantly over time. The French, Japanese and UK loan markets were generally less competitive. Turning to competition among specific types of banks, commercial banks tend to be more competitive, particularly in Germany and the US, than savings and cooperative banks
Notes
Incluye bibliografía
Publish on
Documentos de trabajo / Banco de España, 0736
Subjects
Banking industry; Competition; Loan markets; Marginal costs; Market shares; Teoría de los mercados y los precios; Créditos; Países de la UE; Estados Unidos; Japón
Appears in Collections:
Documentos de Trabajo 2007