Update of the quarterly model of the Bank of Spain 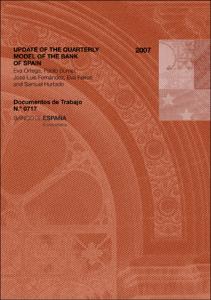 View
dt0717e.pdf
813,36 kB
Authors
Ortega Eslava, Eva
Burriel Llombart, Pablo
Fernández Sánchez, José Luis
Ferraz Rodríguez, Eva
Hurtado López, Samuel
Issue Date
Physical description
48 p. : gráf., tab.
Abstract
This paper presents the update of the macroeconometric model used at the Bank of Spain for medium term macroeconomic forecasting of the Spanish economy, as well as for performing policy simulations. The many changes that the Spanish economy has experimented in the last years, and the new system of national accounts published by the national statistical office, suggested that a reestimation of the model was due. This paper presents such reestimation with newer data (up to the end of 2005), and includes some modifications that were deemed necessary in certain equations. The quarterly model of the Bank of Spain keeps a similar structure to its previous version