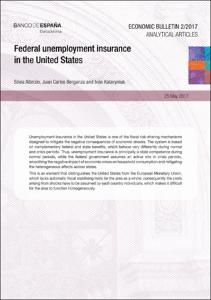 View
beaa1702-art16e.pdf
592,47 kB
Authors
Albrizio, Silvia
Berganza, Juan Carlos
Kataryniuk, Iván
Issue Date
Abstract
Unemployment insurance in the United States is one of the fiscal risk-sharing mechanisms designed to mitigate the negative consequences of economic shocks. The system is based on complementary federal and state benefits, which behave very differently during normal and crisis periods. Thus, unemployment insurance is principally a state competence during normal periods, while the federal government assumes an active role in crisis periods, smoothing the negative impact of economic crises on household consumption and mitigating the heterogeneous effects across states. This is an element that distinguishes the United States from the European Monetary Union, which lacks automatic fiscal stabilising tools for the area as a whole