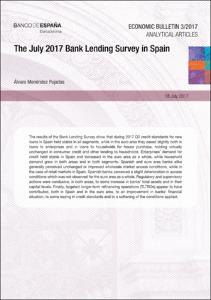 View
beaa1703-art21e.pdf
629,36 kB
Authors
Menéndez Pujadas, Álvaro
Issue Date
Abstract
The results of the Bank Lending Survey show that during 2017 Q2 credit standards for new loans in Spain held stable in all segments, while in the euro area they eased slightly both in loans to enterprises and in loans to households for house purchase, holding virtually unchanged in consumer credit and other lending to households. Enterprises’ demand for credit held stable in Spain and increased in the euro area as a whole, while household demand grew in both areas and in both segments. Spanish and euro area banks alike generally perceived unchanged or improved wholesale market access conditions, while in the case of retail markets in Spain, Spanish banks perceived a slight deterioration in access conditions which was not observed for the euro area as a whole. Regulatory and supervisory actions were conducive, in both areas, to some increase in banks’ total assets and in their capital levels. Finally, targeted longer-term refinancing operations (TLTROs) appear to have contributed, both in Spain and in the euro area, to an improvement in banks’ financial situation, to some easing in credit standards and to a softening of the conditions applied
Notes
Artículo de revista
Publish on
Economic bulletin / Banco de España. Analytical articles
Economic bulletin / Banco de España , n. 3, 2017, 11 p
Other versions
Versión en español
Subjects
Política monetaria; Análisis financiero; Créditos; Zona euro; España
Appears in Collections:
Analytical Articles and Economic Notes
Economic Bulletin 3/2017