Spain in the global value chains 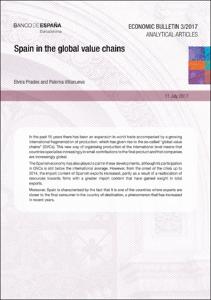 View
beaa1703-art20e.pdf
569,43 kB
Authors
Prades Illanes, Elvira
Villanueva Cortés, Paloma
Issue Date
Abstract
In the past 15 years there has been an expansion in world trade accompanied by a growing international fragmentation of production, which has given rise to the so-called “global value chains” (GVCs). This new way of organising production at the international level means that countries specialise increasingly in small contributions to the final product and that companies are increasingly global. The Spanish economy has also played a part in these developments, although its participation in GVCs is still below the international average. However, from the onset of the crisis up to 2014, the import content of Spanish exports increased, partly as a result of a reallocation of resources towards firms with a greater import content that have gained weight in total exports. Moreover, Spain is characterised by the fact that it is one of the countries where exports are closer to the final consumer in the country of destination, a phenomenon that has increased in recent years
Notes
Artículo de revista
Publish on
Economic bulletin / Banco de España. Analytical articles
Economic bulletin / Banco de España , n. 3, 2017, 8 p
Other versions
Versión en español
Subjects
Análisis estructural; Economía internacional; Estructura y funcionamiento de la empresa; Estudios industriales; Comercio internacional de mercancías; España
Appears in Collections:
Analytical Articles and Economic Notes
Economic Bulletin 3/2017