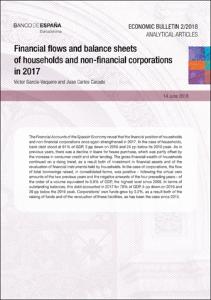 View
beaa1802-art15e.pdf
566,65 kB
Authors
García-Vaquero Álvaro, Víctor
Casado Cubillas, Juan Carlos
Issue Date
Abstract
The Financial Accounts of the Spanish Economy reveal that the financial position of households and non-financial corporations once again strengthened in 2017. In the case of households, bank debt stood at 61% of GDP, 3 pp down on 2016 and 24 pp below its 2010 peak. As in previous years, there was a decline in loans for house purchase, which was partly offset by the increase in consumer credit and other lending. The gross financial wealth of households continued on a rising trend, as a result both of investment in financial assets and of the revaluation of financial instruments held by households. In the case of corporations, the flow of total borrowings raised, in consolidated terms, was positive – following the virtual zero amounts of the two previous years and the negative amounts of the four preceding years – of the order of a volume equivalent to 0.8% of GDP, the highest level since 2009. In terms of outstanding balances, this debt accounted in 2017 for 78% of GDP, 5 pp down on 2016 and 39 pp below the 2010 peak. Corporations’ own funds grew by 3.2%, as a result both of the raising of funds and of the revaluation of these liabilities, as has been the case since 2015
Notes
Artículo de revista
Publish on
Economic bulletin / Banco de España , n. 2, 2018, 7 p
Other versions
Versión en español
Subjects
Análisis financiero; Coyuntura económica; Cuentas financieras; Financiación de la empresa; Economía del consumo y del ahorro; España
Appears in Collections:
Analytical Articles and Economic Notes
Economic Bulletin 2/2018