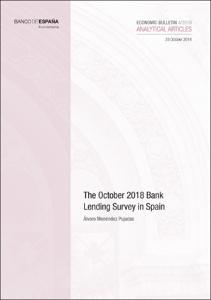 View
beaa1804-art28e.pdf
573,45 kB
Authors
Menéndez Pujadas, Álvaro
Issue Date
Abstract
In 2018 Q3, according to the Bank Lending Survey, credit standards for loans to enterprises eased somewhat, both in Spain and in the euro area, while the terms and conditions applied to such loans also eased. As for lending to households, Spanish banks reported an easing in the credit standards and terms and conditions for consumer credit and other lending to households, and no change in those for housing loans, while in the euro area banks reported no significant changes in the first of these segments and a slight easing in the second. The demand for loans to enterprises fell somewhat in Spain and increased in the euro area as a whole, while in the two segments of loans to households, loan applications increased in both areas. In Spain, banks’ conditions of access to wholesale funding markets deteriorated, while their conditions of access to retail funding markets barely changed. In the euro area as a whole, on the other hand, the changes were very small in both cases. The ECB’s expanded asset purchase programme continued to contribute, over the six month period prior to the survey, to improving the liquidity position and funding conditions of banks in both areas and to easing the terms and conditions for loans, while the impact on profitability was mildly positive in Spain and negative in the euro area as a whole. Both Spanish and euro area banks reported that the ECB’s negative deposit facility rate had led to a reduction in net interest income over the previous six months, and a general fall in interest rates and margins on loans, as well as a slight increase in the volume of lending
Notes
Artículo de revista
Publish on
Economic bulletin / Banco de España. Analytical articles
Economic bulletin / Banco de España , n. 4, 2018, 12 p
Other versions
Versión en español
Subjects
Funding; Credit; Supply of credit; Demand for credit; Credit standards for loans; Terms and conditions for loans; Financial markets; Análisis financiero; Política monetaria; Créditos; España; Zona euro
Appears in Collections:
Analytical Articles and Economic Notes
Economic Bulletin 4/2018