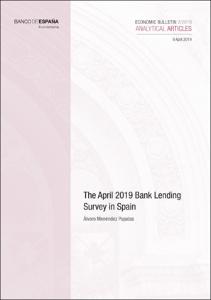 View
be1902-art8e.pdf
618,32 kB
Authors
Menéndez Pujadas, Álvaro
Issue Date
Abstract
The results of the Bank Lending Survey show somewhat less expansionary behaviour of loan supply and demand in 2019 Q1, both in Spain and in the euro area. Thus credit standards for approving loans tightened in both areas in the two segments of lending to households and did not change in loans to enterprises. The terms and conditions for new loans held steady both in Spain and in the euro area, except those for consumer credit and other lending, which eased in Spain and tightened in the euro area. For the second quarter of 2019, the banks of both areas did not anticipate further tightening of credit standards save those for loans to households for house purchase in the euro area. Loan demand in Spain decreased both in that from enterprises and in that from households for consumer credit and other lending, while that from households for house purchase increased. By contrast, in the euro area, the demand for loans to households increased, although that for consumer credit and other lending slowed, and the demand for loans to enterprises stopped growing. According to banks in both areas, the conditions of access to financial markets remained unchanged or even improved, both in retail markets and in nearly all wholesale markets. The ECB expanded asset purchase programme continued having a positive effect on the liquidity and financing conditions of banks in the past six months, although it had a negative impact on their profitability. In addition, this programme continued to foster, in nearly all segments, an easing of loan terms and conditions and an increase in the volume of loans granted. The negative interest rate of the ECB deposit facility contributed, over the past six months, to a decrease in the net interest income of banks in the two areas and to an increase in credit volumes
Notes
Artículo de revista
Publish on
Economic bulletin / Banco de España. Analytical articles
Economic bulletin / Banco de España , n. 2, 2019, 14 p
Other versions
Versión en español
Subjects
Funding; Credit; Supply of credit; Demand for credit; Credit standards for loans; Terms and conditions for loans; Financial markets; Análisis financiero; Política monetaria; Créditos; Oferta y demanda monetarias; Política monetaria; España; Zona euro
Appears in Collections:
Analytical Articles and Economic Notes
Economic Bulletin 2/2019