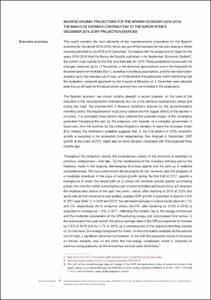 View
be1612-proye.pdf
165,08 kB
Authors
Banco de España. Dirección General de Economía y Estadística
Issue Date
Abstract
This report contains the main elements of the macroeconomic projections for the Spanish economy for the period 2016-2019, which are part of the forecasts for the euro area as a whole recently published by the ECB on 8 December.1 Compared with the projections for Spain for the years 2016-2018 that the Banco de España published in its September Economic Bulletin, the current ones include for the first time forecasts for 2019. These projections incorporate the changes observed up to 17 November in the technical assumptions and in the forecasts for the external environment, as well as in the fiscal assumptions, and the new information available up to the exercise cut-off date, on 24 November. It is particularly worth mentioning that the budgetary measures approved by the Council of Ministers on 2 December were adopted after the cut-off date for the assumptions and are thus not included in the projections
Notes
Artículo de revista
Publish on
Spanish economic projections reports
Other versions
Versión en español
Subjects
Evolución económica y política económica; Sistema monetario y financiero : situación y análisis; España; Zona euro
Appears in Collections:
Spanish economic projections reports